The SkyHawk AI 3.5″ HDD is the latest enterprise hard drive by Seagate optimized for network video recorders with artificial intelligence for edge applications. Offered in a variety of capacities up to 20TB, the industry’s highest capacity, the Seagate SkyHawk AI is designed to be great for large video and surveillance.

The SkyHawk AI 3.5″ HDD is the latest enterprise hard drive by Seagate optimized for network video recorders with artificial intelligence for edge applications. Offered in a variety of capacities up to 20TB, the industry’s highest capacity, the Seagate SkyHawk AI is designed to be great for large video and surveillance.

What’s of particular interest with any of these drives is performance. And while we have found that the latest round of 20TB Seagate drives are very similar including a helium sealing, >= 2M-hour MTBF, and a five-year warranty, we actually saw that the SkyHawk performed better than some of the other Seagate drives. 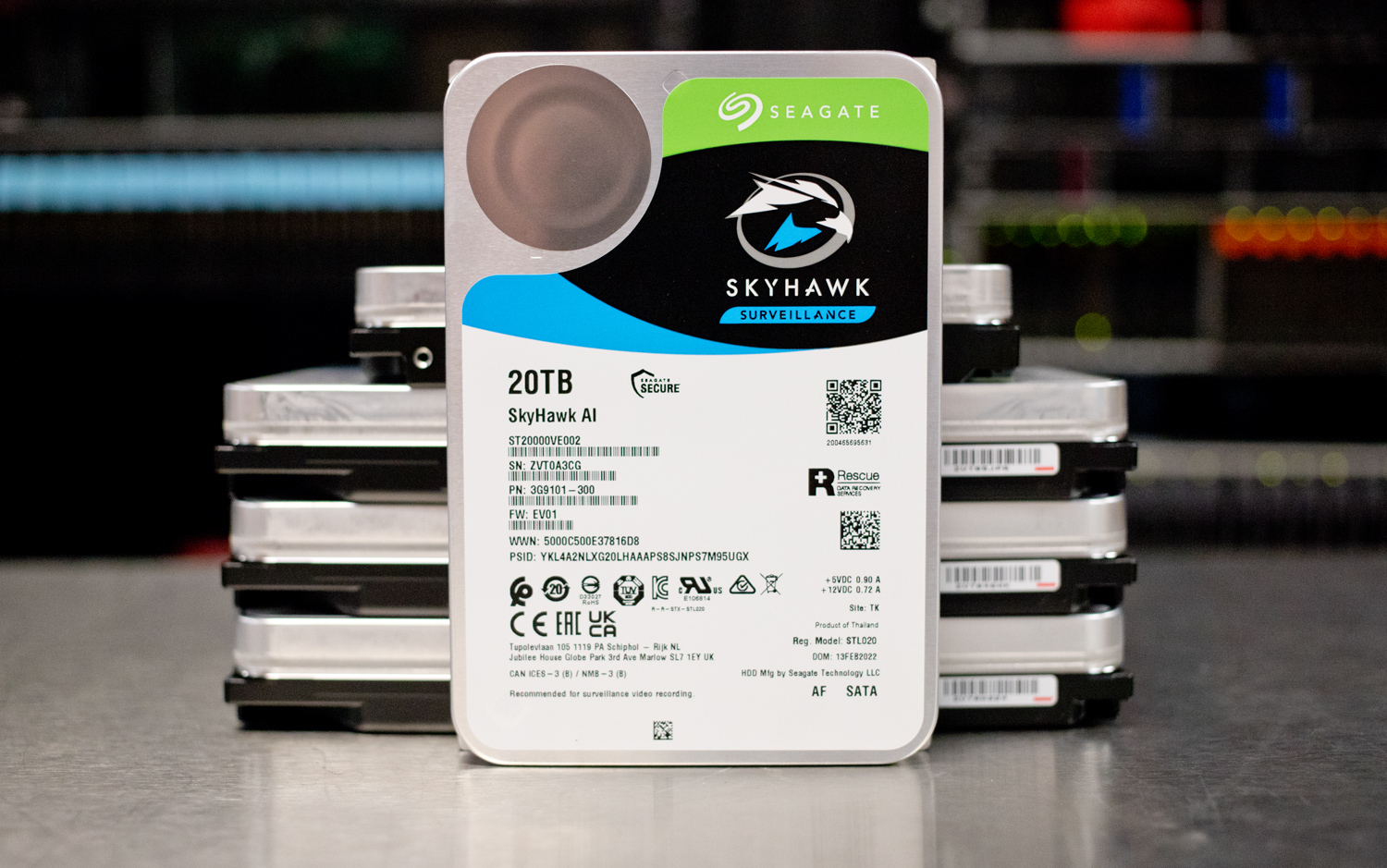 The SkyHawk in all reality is effectively the same hardware as the other 20TB drives (Exos and the IronWolf Pro) in Seagate’s portfolio. The largest difference is the AI support that the SkyHawk has. The SkyHawk supports up to 64 HD cameras and Seagate reports that it can deliver zero dropped frames with ImagePerfect AI. The firmware is also different on the SkyHawk, as most large capacity drives on Seagates portfolio are slightly different on the firmware front. 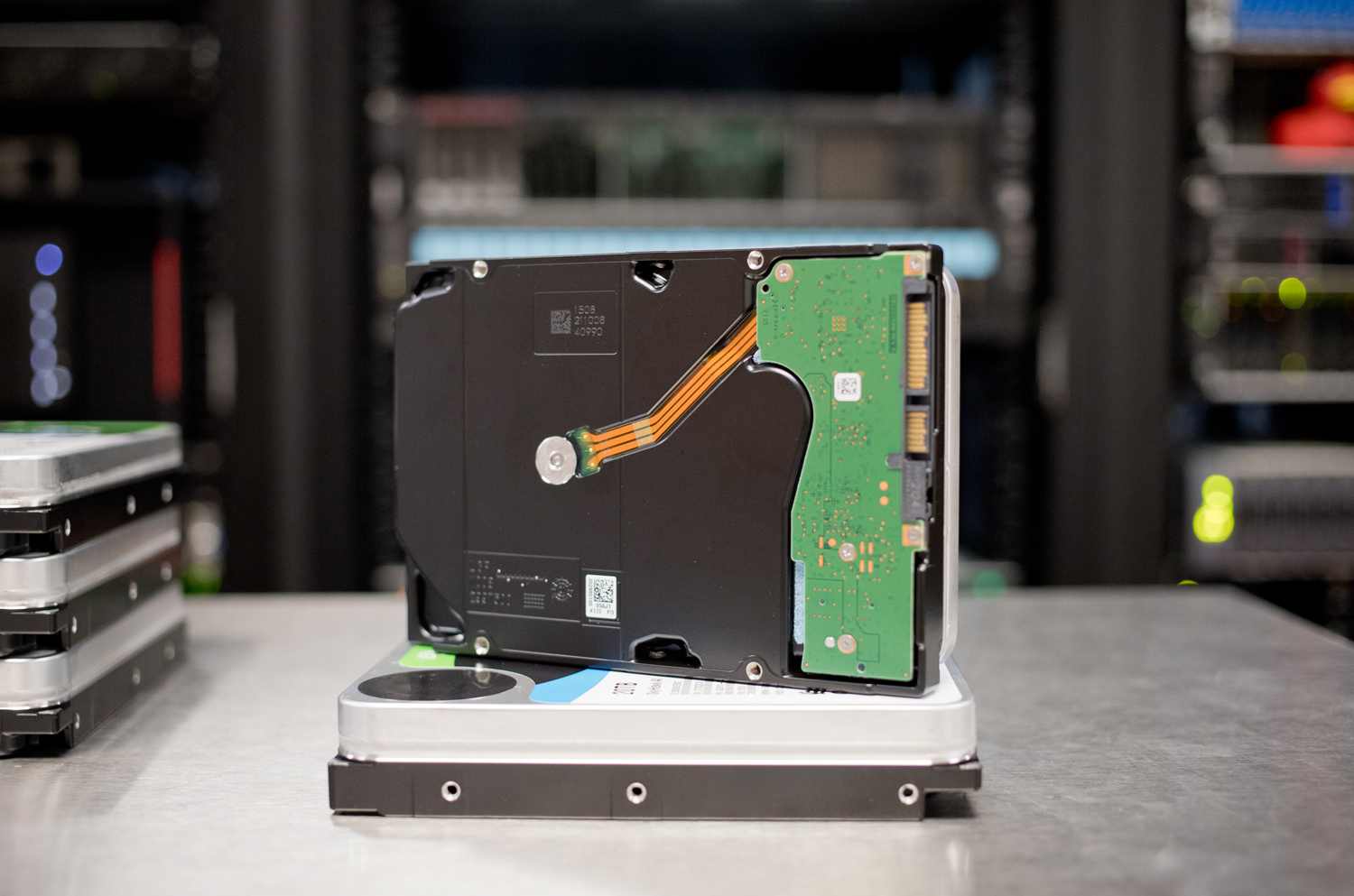 The SkyHawk AI is available in a 8TB, 10TB, 12TB, 16TB, 18TB, and 20TB capacities. All SkyHawk AI drives are rated for 550TB/yr workload rating similar to the Exos X, and if users go with the direct comparison, the SkyHawk non-AI model, the workload rating drops to 180TB/yr.

The SkyHawk AI 20TB doesn’t have a retail MSRP yet, however for a good comparison, the 18TB model has an MSRP of $524.99, so we can expect the 20TB to be a little more. For comparison, the Exos X20 and 20TB IronWolf Pro have street prices near $500. The SkyHawk is the newest of the three, so pricing may fall some as it finds its way into the channel. 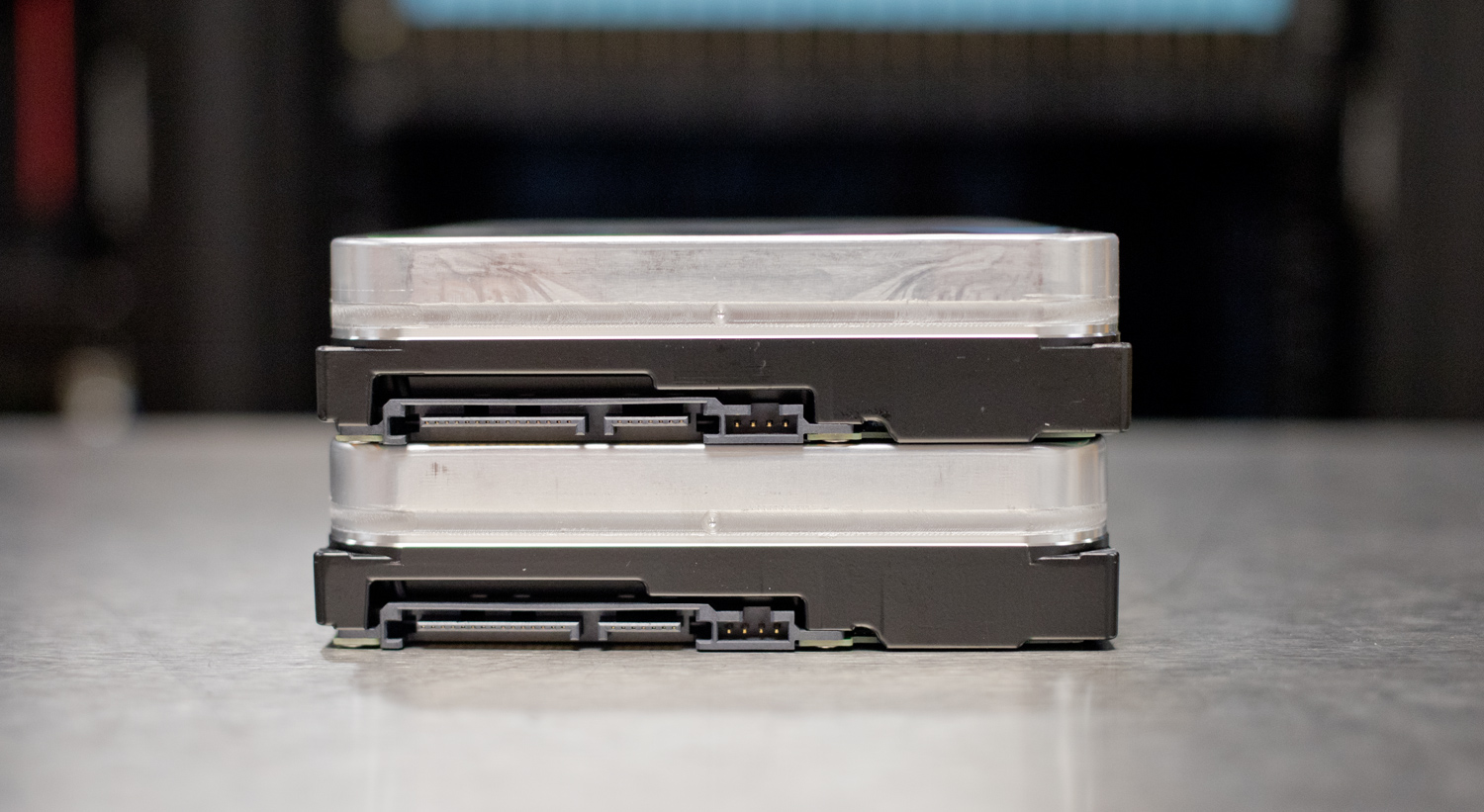 The SkyHawk AI is covered by a five-year warranty, which includes three years of Seagate’s data recovery service. The company claims a success rate of 95%.

Our enterprise hard drive benchmark process preconditions each drive-set into steady-state with the same workload the device will be tested with under a heavy load of 16 threads, with an outstanding queue of 16 per thread. The device is then tested in set intervals in multiple thread/queue depth profiles to show performance under light and heavy usage. Since hard drives reach their rated performance level very quickly, we only graph out the main sections of each test.

Our Enterprise Synthetic Workload Analysis includes four profiles based on real-world tasks. These profiles have been developed to make it easier to compare to our past benchmarks, as well as widely-published values such as max 4K read and write speed and 8K 70/30, which is commonly used for enterprise drives.

Our first throughput test measures 4K random performance. The SkyHawk trailed behind the Exos and the IronWolf Pro on the read side with 6,000 IOPS in SMB and 5,559 IOPS in iSCSI. However in the 4K write performance, the SkyHawk actually had the two highest numbers in write with both SMB and iSCSI maintaining 961 IOPS (SMB) and 1,089 IOPS (iSCSI).

The max latency test showed us a continuation of what we have seen so far. The SkyHawk showed us one of the lower latency’s on the read side with 969.49ms in SMB and 1,179.9 in iSCSI. On the write side of the performance, the SkyHawk maintained a significantly lower score in SMB with 704ms and 1,876.7 in iSCSI.

Our last 4K test is standard deviation, and the SkyHawk continued to perform quite well by being right in line with the Exos. The SkyHawk was at 44.505ms (SMB read), however, in the iSCSI read, the SkHawk was almost half of the Exos at 55ms. In the write performance, the SkyHawk reached 165.5ms in SMB and 417.6ms in iSCSI.

Our next benchmark subjects the drives to 100% read and write activity at 8K sequential throughput. The SkyHawk AI was able to maintain decent performance staying in between the Exos and the IronWolf Pro. The SkyHawk AI saw 127,419 IOPS read and 84,504 IOPS in write in SMB and in iSCSI, it was 204,647 IOPS read and 78,127 write. 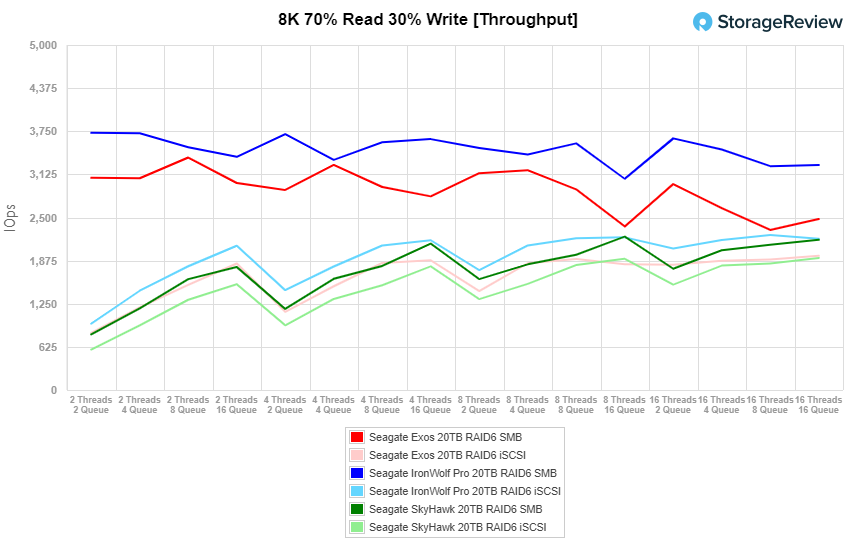 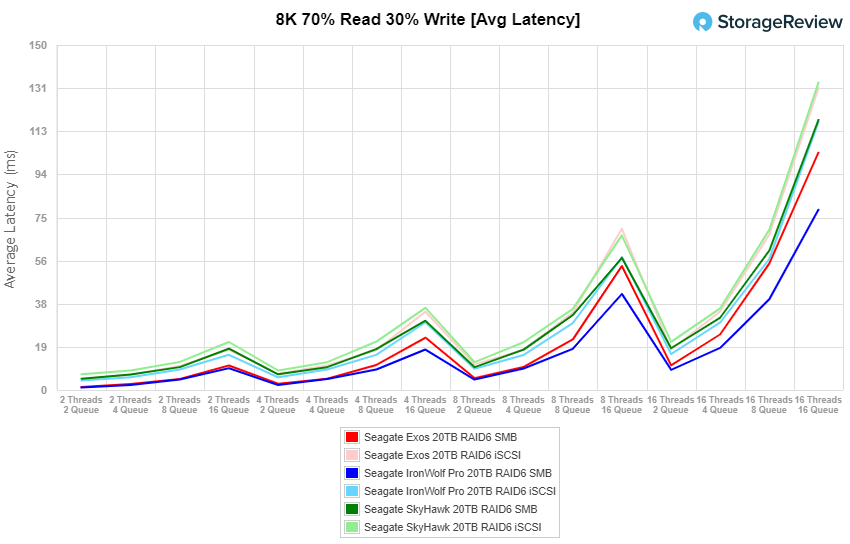 For the max latency numbers, the SkyHawk was quite steady throughout the test with a rise at the end. The SkyHawk had a start of 345ms with an end of 1,277ms in SMB, and in iSCSI a start of 315ms and an end of 1,903ms. 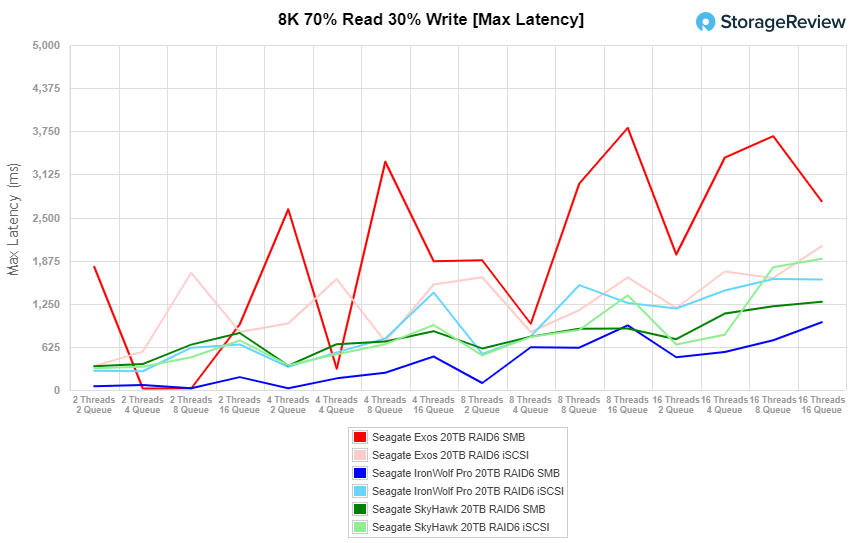 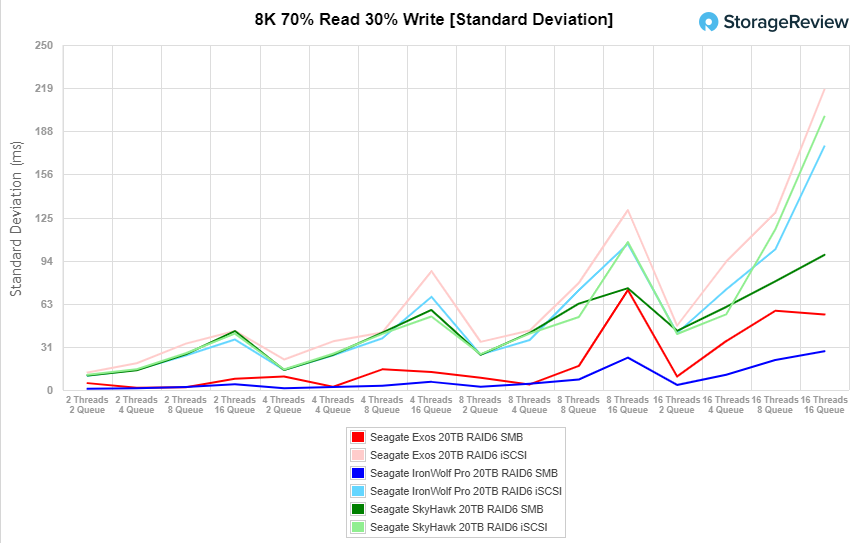 Our final benchmark is 128K read/write, a large block sequential test showing the highest sequential transfer speed. Here, the SkyHawk hit nearly identical numbers in SMB read of 2.314 GB/s and a difference in write of 2.234 GB/s. The story is the same in iSCSI read at 1.937 GB/s and a write of 2.290 GB/s.

The SkyHawk AI is a great drive for enterprise users looking to utilize AI technology as Seagate has their enhanced ImagePerfect™ AI firmware that claims to deliver zero dropped frames when the drive is under a heavy workload. With up to 2M hours MTBF and a 550TB/year workload rate along with a 5-year warranty, 3 of which is part of the Rescue Data Recovery services, the SkyHawk is a solid option for any surveillance station. 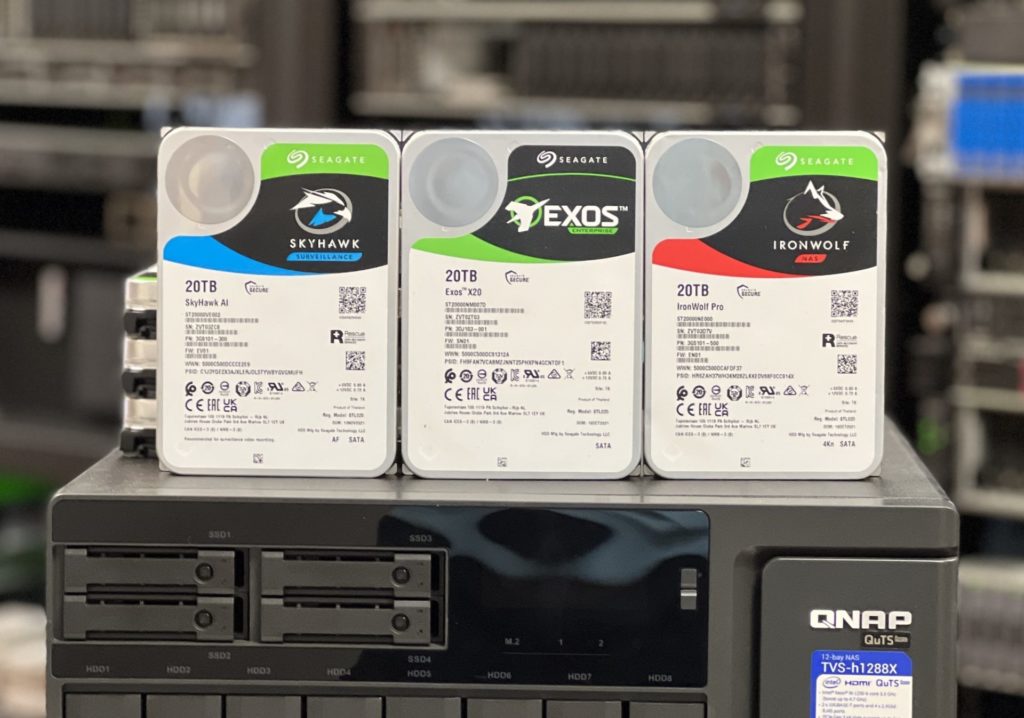 The SkyHawk AI 20TB HDD when compared to other 20TB models in the Seagate portfolio showed certain strengths and weaknesses. It showed significantly higher 8K and 128K sequential write speed in our SMB tests, although lower performance in random workloads.

Seagate has said firmware on each of its models is optimized for the use case. Often we don’t see claims like that translate when it comes time for review, but with the suite of Seagate 20TB HDDs, we can very much see the delineation. With optimization towards incoming camera streams, it’s not a surprise to see sequential write performance as one of the SkyHawk AI’s strengths.

With the Seagate SkyHawk AI 20TB hard drive, Seagate delivered exactly what it intended to, a high-capacity drive suitable largely for many streams of unrelenting writes. In the security and surveillance world, reliably capturing data is of critical importance. The SkyHawk AI does very well on that front and should make a nice companion for NVR/NAS deployments in all sorts of environments.